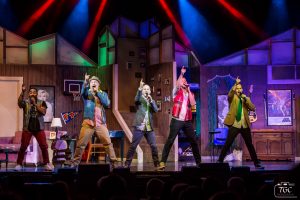 Forever Young is an exciting new look at the greatest hits of all time. Starring five of the most talented guys you’ll ever meet, Forever Young takes you back to the music of your youth, back to the moment you discovered what it meant to set the record down, push play and tune in!

Set in a suburban basement, Forever Young is jam-packed with powerhouse vocals, dynamite choreography, and, most importantly, a story of five best friends who discover that a record player can truly change everything.

Packed full of pop, rock, and country classics, Forever Young is ultimately a tribute to your life…and your music! 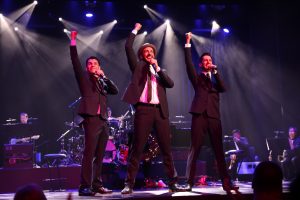 An iconic singer-songwriter gets a brand-new sound in CAROLE’S KINGS, the world’s first all-male Carole King tribute. With lush orchestrations, witty banter, and a cast of three incredibly talented New York stage veterans (one of whom plays live piano throughout the show), CAROLE’S KINGS is a dynamic act jam-packed with chart-topping sensations such as “The Locomotion,” “I Feel the Earth Move,” “You’ve Got A Friend,” and many more. Amazing vocals, hilarious comedy, and a flexible band size perfect for presenters of all budgets make CAROLE’S KINGS a unique experience that’s fun for the whole family! 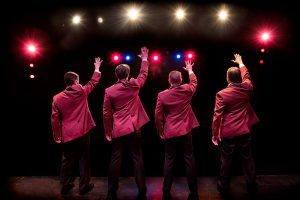 Pioneered by John Michael Coppola, best known for his appearance in Chicago’s long-running production of the Broadway smash hit Jersey Boys, THE FOUR C NOTES are the Midwest’s only tribute dedicated to recreating the music of Frankie Valli and the Four Seasons!

They have been seen at private events, performing arts centers, and outdoor festivals all over the county!

The performance features all of your favorite hits, including:
“Sherry”, “Big Girls Don’t Cry”, “Walk Like A Man” “Workin’ My Way Back To You, (Babe)”, “Can’t Take My Eyes Off Of You”, “Let’s Hang On”
and many, many, more…

Four guys, smart choreography, and Mr. Coppola’s legacy with the Frankie Valli and Four Seasons catalog give THE FOUR C NOTES  an authenticity to their performance that similar tribute groups simply cannot match…ANYWHERE! 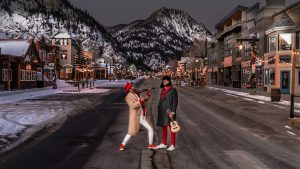 B2wins: Sounds of the Season

You loved them in our streaming season, NOW SEE THEM LIVE!  This high-energy entertainment group continues to captivate audiences worldwide with its unique sound and an engaging live show that targets the masses. Led by charismatic Twin brothers from Rio de Janeiro, they combine a plethora of genres into a live show that is equal parts rock concert, jam session, dance party, and house party. Fans describe it as seeing your new best friends in concert.

Growing up in the violent, slums of Brazil, the Twins began playing classical music on violins their father made by hand. They used music as an escape from their reality and began teaching others in their neighborhood. After being featured on National Public Radio, the Twins were invited to the US on full-ride music scholarships.

After performing 153 shows across 14 states in 2019, B2wins continue to cultivate a loyal fan base wherever they perform. From hip-hop heads to jazz aficionados, rockers to reggae fans, all find common ground at a B2wins show. The Twins are on a mission to change the world, one smile at a time.

Join these twins for a high-energy start to your Holiday season! 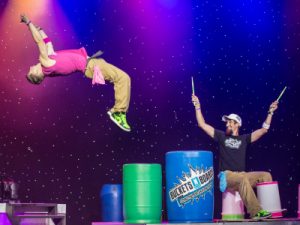 Buckets ‘N’ Boards comedy percussion show is a spectacularly imaginative work brought to life by two prolific performers, musicians, and comedians.  Witness this joyous charm as Matt and Gareth bring to life their characters with nonstop hilarious interplay.  The intricate beats and stunning synchronicity are AWESOME to behold!  The sheer variety of instruments and found objects they are able to manipulate is inspiring!  The comedy centered on the improvisational interactions with the crowd is the driving force of the show.

“One of the most requested headline acts on Disney cruise lines” 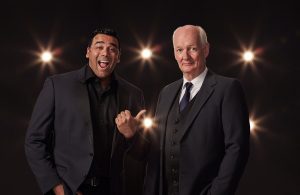 From the brilliant minds of improv and comedy legend Colin Mochrie and Master, Hypnotist Asad Mecci comes a brand new, mind-blowing, jaw-dropping, side-splitting show. Hypnosis and Improv — two art forms that have mystified and entertained fans, skeptics, and everything in between for decades worldwide – come together as two masters of their crafts unite for a totally unique comedy experience — HYPROV: Improv Under Hypnosis.

Twenty random volunteers from the audience will be put under hypnosis (the process of which is a show in its own right), their inhibitions evaporated and their minds no longer their own. The four or five best are left on stage when one of the world’s leading improvisers enters! Colin Mochrie (co-creator) will initiate and manipulate those under hypnosis himself and turn the show into an improv extravaganza!

In the hands of two masters, and solely crafted from the audience’s uninhibited subconscious, this will be an entirely original and completely unforgettable show, for who knows where the unconscious mind will go. What can possibly go wrong? Come and see for yourself! 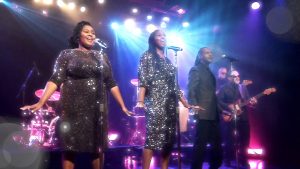 You danced to the music of Motown when we brought you That Motown Band in our streaming series.  Now enjoy them LIVE!

Do you love songs like Heat Wave, Ain’t too Proud To Beg, Baby Love, Ain’t No Mountain High Enough, My Girl, and Rescue me? Do you love artists like Smokey Robinson, The Temptations, The Supremes, and The Four Tops? Then, you are going to love this group of talented vocalists and musicians.